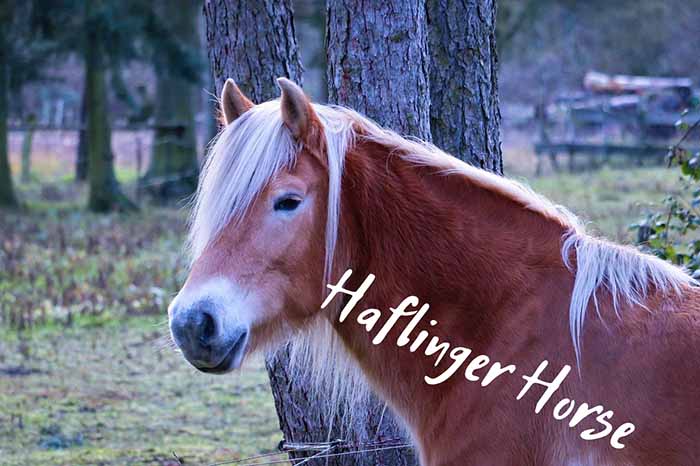 Today I wanted to talk a bit about the Haflinger horse – a rather underrated horse breed that definitely deserves more time in the spotlight. The Haflinger breed was developed in Austria and northern Italy in the 19th century, so we’re talking about a European horse breed.

Also known as Avelignese, the Haflinger is a small horse with a few unique features and interesting history. The breed traces its roots back to a foundation sire named Folie, and today, all Haflingers can trace their lineage back to Folie through one of seven bloodlines.

After World War II, breeders started to cross Haflingers with other horse breeds without any regard for purity. This put the breed in danger of extinction. Fortunately, though, in 1946, some breeders focused on creating purebred Haflingers and even put together a closed studbook.

Up next, I want to walk you through 10 of the most interesting aspects of the Haflinger horse. You probably didn’t know some of these facts, so this should make for an interesting read if you’re an equine enthusiast.

1. The Haflinger is a horse, not a pony.

Even though it only stands between 13.2 and 15.0 hands tall, the Haflinger is officially considered a horse, not a pony. Granted, the breed’s height standard has increased a bit over the years. At the end of World War II, the breed had an average height of 13.3 hands.

As we already know, anything below 14.2 hands is officially considered a pony. However, since some Haflingers can reach up to 15 hands nowadays, the breed as a whole will not fall in this category anytime soon. The Haflinger’s small stature comes with a series of advantages, though. This horse doesn’t need a lot of boarding space, and it shares a pony’s hardiness and soundness.

2. The breed has 7 stallion lines.

There are 7 stallion lines in total for the Haflinger horse, all of which eventually lead to Folie – the foundation stallion.

3. They are still used by the military.

These horses were widely used by the military in both World War I and World War II. The disruption of their breeding programs brought them to the brink of extinction, but they survived thanks to the efforts of dedicated breeders.

Today, the Austrian army still uses Haflingers as pack horses on rough terrain. They are mostly employed in high Alpine regions with aggressive slopes and high steps. The 6th Infantry Brigade in Hochfilzen has about 70 of these horses. The Germans use them as well for similar purposes.

The fact that the breed is being used by the army in today’s day and age is actually a good thing. It means that there is an active interest in keeping the breed alive.

If you ever had a closer look at a Haflinger horse, you might have noticed its oddly familiar head shape. It does look like an Arabian somewhat, and there’s a very good reason for that. Indeed, this breed has received infusions of bloodlines from Arabian and various other European breeds.

The Arabian is one of the most resilient and beautiful horses in the world, and having some of its characteristics is definitely a welcomed addition to any horse breed. Some believe that this Arabian infusion is what gave the Haflinger its incredible soundness and intelligence.

5. The Haflinger horse comes in a single color.

If you were looking to get a Haflinger in any other color than chestnut, you’re out of luck. This breed only comes in this single color, but there are different shades of it. Some of these horses come in light gold or a rich golden chestnut. Some of them even have a beautiful liver hue.

As for the mane and tail, they should both be as pale as possible, otherwise referred to as flaxen or white. If a Haflinger is found to have spots on its coat, as well as white socks or any deviations in the mane and tail color, it will be considered flawed and will not be used for breeding.

6. This is a versatile breed.

These horses were bred to be versatile from the ground up. They don’t excel at just one thing but can be trained to perform in a different variety of competitions. They are also strong enough to be used at the draft or for driving. Some of the main equestrian sports that involve Haflingers include endurance riding, dressage, and vaulting.

The breed also achieves great results in therapeutic riding. In the early days of the breed’s development, these horses were mainly used as packhorses and for forestry and agricultural work. It seems that there aren’t too many things that a Haflinger can’t do.

7. Haflingers are not good for beginners.

I’ve had only good things to say about this breed so far, but there is something that I don’t quite like about it. These horses are not very well-suited for beginners. It’s not that they’re not smart enough to be trained, quite the opposite. They’re so smart that they constantly test their riders’ skills in the saddle.

This means that they need to be handled by someone experienced. They can immediately detect when a novice rider sits on their back, and they can become a bit difficult to work with. The good news is that they are not nervous or easily spooked. With a bit of work, they can be trained to be obedient and considerate even with completely new riders. I think it doesn’t come as naturally to them as it does for other horses, though.

8. Haflinger is of the soundest horse breeds in the world.

When it comes to health and soundness, the Haflinger has an incredible track record. This is one of the soundest breed of horses around, and it should come as no surprise considering it is derived from a pony.

Ponies are healthier overall when compared to larger horses. They live longer and are generally stronger and tougher. The Haflinger, while not a pony in the purest sense, has borrowed these incredible genetics from its ancestors.

After many years of living in mountainous regions, these horses have developed strong hearts and lungs. They can live up to 40 years in ideal conditions, which is quite a bit above average for a regular horse.

9. They get bored easily.

They are incredibly intelligent, Haflingers. That’s why they constantly need challenging both mentally and physically. You should avoid keeping one in a stall for too long, but if it can’t be helped, make sure it has some toys or other objects around that will keep its mind busy.

They get bored easily, and a bored horse is not a happy one. To prevent boredom, give them something to play with or visit them frequently in the barn. Even something as simple as a short visit can make them feel better and brighten up their day. Especially if you bring treats.

10. The first cloned horse was a Haflinger.

Maybe you’re not all that familiar with animal cloning, or maybe you’re against it altogether. Whatever the case, the truth is that the very first horse to be cloned was actually a Haflinger. This happened back in 2003 when a filly named Promethea became the seventh animal in the world to be cloned.

After she was born, scientists ran a series of tests and determined that the filly was a genetic twin to her mother. This means that this cloning process, and its result, were completely unique and groundbreaking. Even in the scientific community, the Haflinger continues to impress.