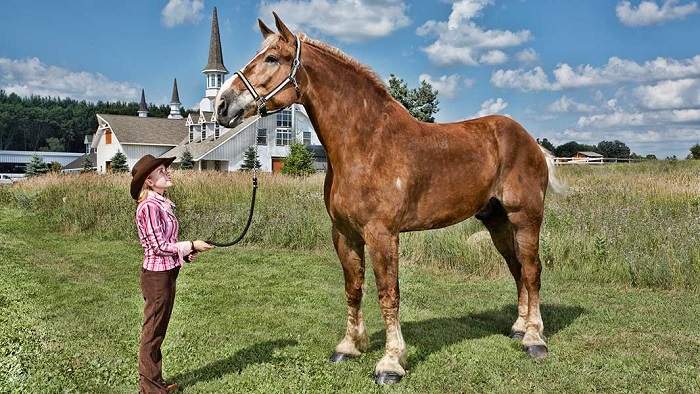 Here’s all you need to know about Big Jake the horse.

At the time of writing, Big Jake is still the tallest horse alive, even though he sadly passed away in June 2021. Big Jake stood 20.3 hands tall, which is around 210.2 cm or 6 ft 10-3/4 in. The difference between Big Jake and other tall horses is that its height was actually acknowledged and recorded by Guinness Records in 2010. That’s when the horse was measured, and that’s when he broke the record for the world’s tallest horse.

I should note that Belgian draft horses are known worldwide for their incredible size (see Brooklyn Supreme), muscular build, and pulling power. When he was foaled, Big Jake weighed no less than 240 pounds, which is about 50 pounds more than an average foal weighs at birth. It’s safe to assume that Big Jake’s owners knew he was going to be incredibly tall right from the start. Speaking of its age…

How old is Big Jake the horse?

Big Jake was foaled in 2001 in Nebraska, and he died in 2021 at 20 years of age. We know that horses usually live between 25 and 35 years, but since this particular horse is so large, its life expectancy was a bit lower than usual.

He lived at the farm since 2013, in the company of its owner Jerry Gilbert. Ever since Jake broke the record, hundreds of people have gathered up at once in order to visit him at the farm. He was a real local star and a big attraction, although he didn’t have the same energy he once did.

Big Jake was measured by Guinness Records on 19 January 2010 in order to determine if he was indeed the tallest living horse at the time. The measurements had to be done without him wearing any horseshoes. Even so, his height came in at a whopping 20 hands 2.75 in (210.19 cm or 6.8 feet).

Ever since that day, Big Jake’s popularity has soared. There have been countless videos released of him and his owners, and people flocked to Smokey Hollow Farm in order to see the horse in person. Even today, Big Jake is uncontested in his title. The only other horse that was taller than him (officially) was a Shire gelding named Sampson. That horse was eventually renamed Mammoth to mirror its enormous size, as he stood 21 hands 2.5 in (2.19 m; 7 ft 2.2 in). That was in 1850, though, and Mammoth managed to keep his “tallest horse ever” title for 168 years.

As you can see, exceptionally tall horses are very rare indeed. Before Big Jake, the tallest living horse was a Clydesdale named Remington. He stood 20 hands (203.2 cm, 80 in), and he was measured in 2009 at Lake Country Animal Hospital in Frisco, Texas, USA. 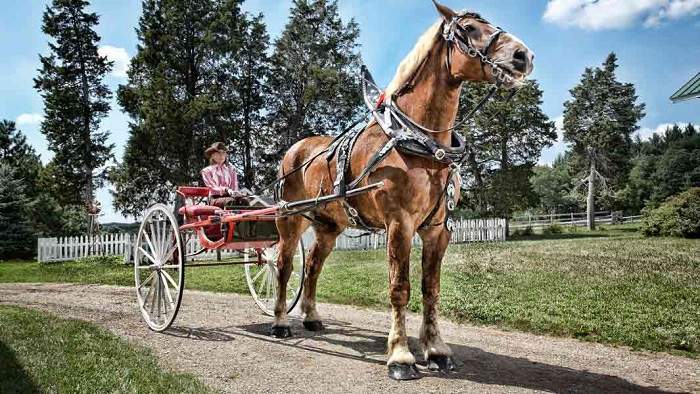 Big Jake was a very well-behaved horse. According to its owner, he loved the attention he got from visitors. He particularly enjoyed getting belly rubs and his neck scratched. People were rightfully intimidated by his big stature, and some were even afraid to go near him at times. As Jerry Gilbert put it:

“People are shocked when they see him in person! Life has been a bit busier since Jake has held the record due to so many people wanting to see him.”

What makes Big Jake’s stature particularly interesting is that its “parents” were not very large horses at all. Having such a large horse on the property does come with its own set of challenges for Jerry Gilbert. Apparently, Big Jake used to eat a full bucket of grain twice per day as well as a bale of hay per day.

As for accommodations, Big Jake’s stall measures 20 x 20 feet. By comparison, a stall for a normal draft horse is usually 12 x 12 feet. For more information about how much space a horse needs to live comfortably, make sure to check out this article right here.

Regarded by many as a “gentle giant,” Big Jake was a truly wonderful equine and well deserving of its title and fame. Hopefully, he’s now in a better place, prancing along on endless green fields with other beautiful horses.

If you’ve visited him before and have any first-hand information to share about this incredibly tall horse, feel free to get in touch and share your story!