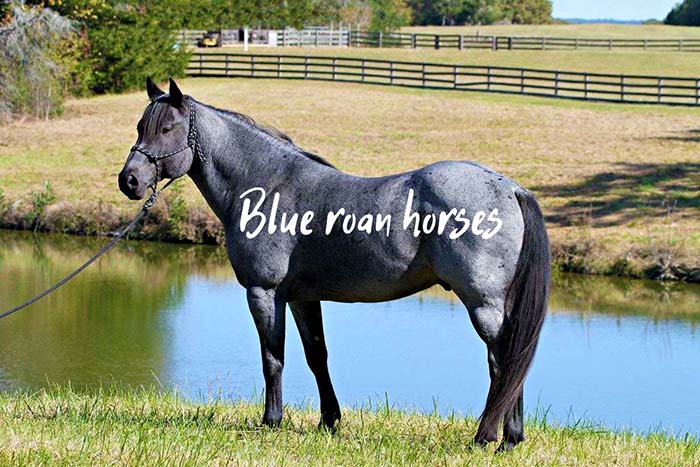 Blue Roan Horses: Everything You Need to Know.

Have you ever seen a roan horse? They are absolutely breathtaking. The main thing that sets them apart from other horses is that their coats exhibit a unique duality when it comes to color. Roan horses have equal parts colored coats and white coats. In the case of blue roan horses, they have a 50/50 combination of black and white hairs in their coats.

Blue roan horse breeds are not indigo or blue-colored at all. They actually have a black base coat complemented by white hairs. This indeed gives them a blueish appearance, which gives sense to the name. The tail, head, mane, and legs of a blue roan horse are usually dark in appearance, as white hairs are often absent altogether.

One thing that all blue roan horses have in common is that they are born this way. Indeed, some blue roans might appear completely black at birth, but soon after they shed their initial coats, they reveal their true appearance.

How to spot a true blue roan horse.

It’s not uncommon for horses to be called roan even though they’re actually not. Quite often, gray horses with roan-like patterns are miscalled roan and even registered as such even though they are certainly not blue roan. True roans are easy to spot by an experienced horseman.

At a glance, they both look quite similar, but a keen eye will immediately see that the horse on the left has a much darker tone when compared to the one on the right. That’s because the horse on the left has a pattern called Rabicano. While a true blue roan will have an even mix of white hairs across its body, the Rabicano’s white hairs are clumped together at the base of the tail and the flanks.

A close look at the tail base reveals a series of horizontal white hair stripes, which are not present on the right-side horse. Some common horse breeds that exhibit the Rabicano pattern are Arabians and Thoroughbreds. Arabians with Rabicano are most often confused for blue roan.

In our case, the right-side horse is a true blue roan, and the horse on the left has a Rabicano pattern.

Examples of horse patterns that can be mistaken for blue roan.

There are other horse coats that can be mistaken for roan or blue roan. Here are some of the most common ones:

There are certain horse breeds that will never carry the roan gene, such as the Suffolk Punch, Arabian, and Hafflinger. Some of these might become imposters and exhibit similar coats, but they will never actually be true roans.

What are the most common blue roan horse breeds?

Horses that become true roans come from different breeds and backgrounds. Some of the most common ones include the Italian Heavy Draft and Brabant, but these are both European draft breeds.

For North American breeds, I should mention the Quarter Horse, Paso Fino, Mustang, Standardbred, Tennessee Walking Horse, and quite a few Paint horses.

There are several British ponies that become true roans, including Gypsy cobs and Shetland ponies.

Often mistaken for one another, gray horses and roan horses are not the same, nor do they really look that similar if you pay close attention. Almost all horse breeds can have gray coats, and the main thing that sets them apart from blue roans is that a gray horse coat will become lighter and lighter as the horse gets older.

There are a few signs you can look out for that will tell you if your horse is turning gray. The first spots of gray hair will appear around the muzzle and eyes. Gradually, the coat will take on a gray appearance, and it might even look roan at some point.

On the other hand, roan horses don’t turn gray as they get older. They simply don’t possess the required gene to grow white hair.

A word on genetics.

I thought it was important to mention genetics because roan horses have a specific gene that allows them to take on this unique appearance. Because I’m definitely not an expert in horse genetics, I’ll try to explain this in very common terms.

As far as coat colors are concerned, all horses in the world are born with a red base or a black base. There’s a very important gene that comes into play, namely the agouti gene, and whether the horse has it or not will greatly influence its appearance. Basically, this gene can turn a black horse into a bay horse. On horses with a red base, it has no effect whatsoever.

It is important to remember that dominantly inherited genes such as the agouti gene cannot skip generations. This means that if a horse had at least one truly roan parent, that horse will become roan as well, or at least it will carry the gene to some extent.

If it looks like the gene has skipped a generation, it’s most likely that one of the foal’s parents was only partially roan. Genetics is a complicated field, and like I mentioned before, distinguishing between a horse that truly possesses these markups and one that only looks roan is not always easy.

Because of this, I think that truly roan horses are incredibly precious and that we should make an active effort to preserve their unique genes.

There are exceptions to these rules.

In horse genetics, few things are certain 100% of the time. This is what makes the field so fascinating, but also confusing for regular horse owners. Fortunately, we can rely on genetic tests to identify the roan gene. This can help us solve some mysteries, such as gray horses that don’t appear roan and yet produce roan offspring.

In this case, it is entirely possible that the horse in question was both gray and roan. However, it’s worth noting that these are extremely rare occurrences. In theory, it’s possible that a horse could be Sabino, Gray, Rabicano, and Roan at the same time. In reality, I’m not aware of any such recorded cases.

What’s the difference between blue roan and red roan horses?

Their names are self-explanatory. A blue roan horse will have a blueish appearance, while the red roan will appear reddish. A closer look reveals that the blue has a black undercoat while the red comes with a bay or chestnut undercoat. Of course, it can also have an undercoat that’s somewhere in between bay and chestnut.

Back in the day, horses with a sorrel or chestnut base coat were called “strawberry” horses. This reflected their pink-like roan coat coloring, but the term is no longer in use today. 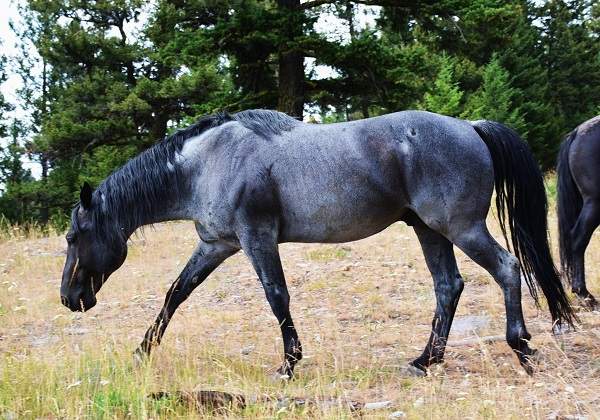 Roan horses are fascinating, to say the least. Their unique genetic markup and their incredible appearance make them incredibly sought after. Moreover, obtaining a true blue roan horse is not a walk in the park. If you do decide to buy one, make sure to run at least some basic genetic tests that identify the agouti gene.

If you would like to breed your own, you’ll have to make sure that none of the foal’s parents are homozygous for agouti. It takes work, know-how, and practice to breed such a unique horse. If you get it right, though, you can end up with a true treasure in your stable, and that makes it all worthwhile.