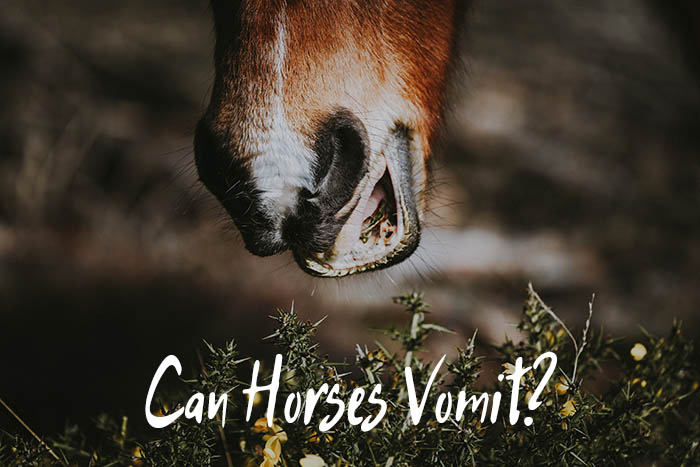 Can horses vomit? This is definitely one of the more disagreeable topics out there, but I think it deserved to be covered nonetheless. Most domestic animals that live around us nowadays are able to throw up their stomach contents. Whether they do it to eliminate something harmful they ate or simply because they’re sick, the important thing is that they can vomit.

When it comes to horses, they can’t really vomit at all, which is interesting and a bit scary if you think about it. If a horse has ingested something harmful such as a poisonous plant, there’s no way it could throw it up, and the horse’s handler won’t be able to make it vomit either.

The next obvious question is why can’t horses vomit? And in order to answer that properly, we’ll need to understand how this event happens in most mammals, and even in humans. The bottom line is that it’s nearly impossible for a horse to vomit, at least not without external aid.

What happens when we vomit?

Bear with me because things are about to get interesting, albeit a bit graphic. While vomiting feels like a reflex and happens very quickly for most of us, it’s actually triggered by a series of chained events.

First, our vocal cords close, then the larynx rises just before the soft palate closes off our airways.

Next up, the diaphragm contracts in a downward motion, which means the lower esophagus is no longer under so much pressure. The abdominal muscles will contract next, which causes the stomach to become under sudden pressure.

These events make it clear for the stomach’s contents to push outwards. Everything happens involuntarily – we don’t even think about it. However, without this exact chain of events happening, we wouldn’t be able to vomit at all.

Why is it almost impossible for horses to vomit?

With horses, their digestive system is designed for a one-way trip. This means that there are certain physiological mechanisms that keep food from coming back up:

Are there any reported cases of horses vomiting?

There have been a few cases of equine vomiting reported in the past. However, given what we know so far, I’m highly skeptical that those cases involved actual vomiting from horses. It’s much more likely that the horses in question simply ejected some food that was stuck in their esophagus.

Moreover, it’s important to note that regurgitation is not the same thing as vomiting. Very sick horses might regurgitate their food because their esophageal muscles are too weak. A regurgitation is a passive event that involves food coming out of the horse’s mouth and nose. With vomiting, the content of the stomach is expelled in an active, controlled fashion.

Why did horses evolve without the ability to vomit?

At a glance, it might seem that horses are more vulnerable than other animals simply because they can’t vomit. It’s certainly true that many horses die each year due to eating poisonous plants, but things used to be different for wild horses. Wild horses were very picky when it came to the plants they ate. In addition. horse’s digestive system is designed to work around the clock, and vomiting would surely disrupt its normal function.

However, the most important thing to keep in mind here is that horses are prey animals, therefore they rely on acute awareness, speed, and agility in order to survive. How does vomiting tie into this? Well, when a horse gallops, its intestines move quite a bit in a forward and backward motion thus hitting the stomach. If that were to happen to humans or other mammals, it would cause instant vomiting. It would be very difficult for a horse to run away from its predators if it had to puke while doing so.

The horse’s powerful lower esophageal sphincter likely evolved as a defense mechanism that allows the animal to run at full speed without throwing up. After all, horses were much more in danger of being eaten by predators than by dying from a poisonous plant. This theory makes sense, and I think it’s one of the best ones we have so far.

Because vomiting and burping are somewhat related, horses can’t burp for the same reason they cannot vomit. The lower esophageal sphincter does not allow for food or gas to come back up, which means that horses have only one way to pass gas – the ordinary way through the intestines.

If you think you’ve heard your horse burping before, what you actually heard was air being released from the esophagus. Usually when a horse cribs, it sucks air down into the esophagus. As the air comes out, it makes a sound similar to burping, but it has nothing to do with expelling stomach gas.

Horses are not able to vomit or throw up the contents of their stomachs. This makes them more vulnerable to poisoning than other mammals, but it’s likely that they evolved this way for a reason. Other animals that can’t vomit include rats, rabbits, mice, and squirrels.

As always, if you suspect your horse has eaten something that’s bad for him, make sure to get in touch with your veterinarian as soon as possible. Since horses can’t vomit, vets need to clear out the contents of their stomachs manually. This is not something you’ll want to try yourself.

If you have anything else that you would like to add or maybe share your own experiences regarding horses, feel free to get in touch.