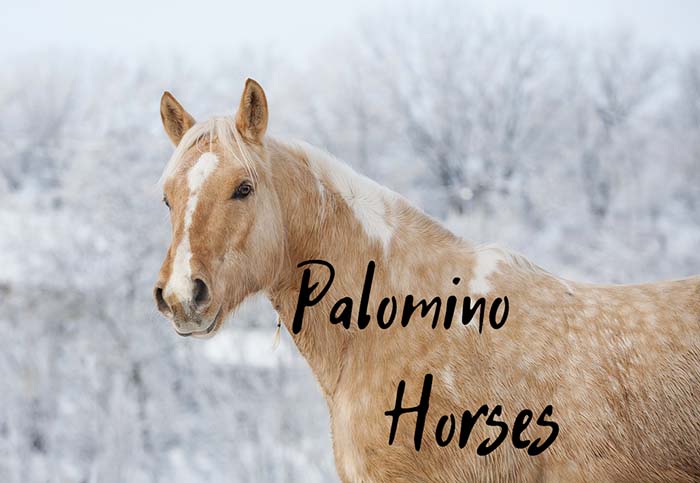 Humans have placed palomino horses in high regard since ancient times. It’s easy to understand why: we tend to like anything that’s shimmery and golden, as it gives us a sense of refinement, quality, even superiority at times. Palomino horses definitely look the part: their beautiful golden coats and white manes allow them to stand out among other horses.

What’s key to remember is that palomino refers to a horse’s color and not its breed. That means that almost any horse breed can produce a palomino. There is one breed that’s much more likely to become palomino than others are, and that’s the Quarter Horse. For a horse to be recognized as a palomino, it needs to have a yellow or golden-colored coat as well as a white mane and tail. The body coat color can range from cream to dark gold.

Below you will find every bit of information I could gather about these beautiful horses, including their average life expectancy, price, physical attributes, and even some unusual facts.

There’s no such thing as a Palomino breed, only a color.

Some people tend to confuse the palomino horse coloring with an actual horse breed, but the truth is that there is no such thing as a palomino horse breed. Much like it’s the case with Cremello horses, Palominos come from many different backgrounds and different breeds.

It is the horse’s genetic markup that establishes whether it is indeed palomino or not. The breed has nothing to do with it, really. Since we’re on the subject, let’s find out exactly how breeders go about creating palominos.

You can’t just cross any type of horse with a palomino and hope to obtain a beautiful golden-coat foal. Breeders know this very well, and in order to increase their odds of success, they generally cross palominos with Perlino or Cremello horses.

The color of a Palomino horse is caused by a unique gene.

All horse coat colors are influenced by genetics. In the case of Palomino horses, their coats will range from cream to dark gold. In order for a horse to become Palomino, it needs to have a chestnut base and a cream dilution.

Genetics is complicated, and you probably don’t want to read about the specific processes that dilute a horse’s coat color. However, I can tell you in just a few words that the horse’s base chestnut color is influenced by something called genotype C Ccr at the C locus that transforms the red tones in the chestnut to yellow pigments.

These horses were ridden by Spanish nobles in the past. 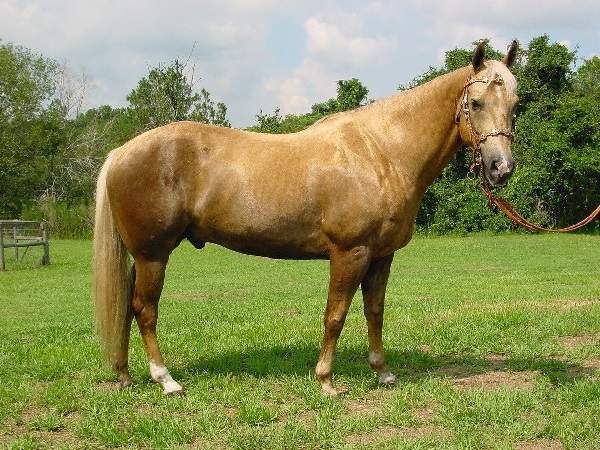 There was one particular royal figure in Spanish history that influenced the fate and well-being of Palominos over the centuries. I’m talking about Queen Isabella, who kept no less than 100 of these beautiful horses in the 1500s. These horses were reserved to be ridden by nobility only.

The name Palomino comes from Juan de Palomino – a Spanish conquistador who received one such a beautiful horse as a gift from Cortez. When the conquistadors started their voyage to the New World at the behest of Queen Isabella, they also took one palomino stallion and five mares with them. As it turns out, these horses acted as the main stock for all Palominos currently in North America.

One of the most interesting facts about these amazing horses is that they can change their coat color throughout the year. The coloring also depends on their diet, as hay or grain rich in protein can cause them to appear darker.

Furthermore, their coats change dramatically from summer to winter, so much in fact that they can sometimes appear as completely different horses. This phenomenon is not restricted to Palominos exclusively, but since their coats are so much lighter than other horses, it’s definitely more noticeable.

What are the origins of Palomino horses?

Has there always been a Palomino coloring in equines? Are golden coats common only in our modern days, or were they also present in ancient times? While nobody knows exactly what caused horses to adopt this specific color over the years, there is a very good theory that I’d like to share with you.

Some scientists and researchers have proposed that horses took on the palomino coat as a defense mechanism. The theory goes like this: horses began having golden coats for the first time thousands of years ago in the desert areas of the middle east. This golden coat looks very similar to the color of sand dunes. This would have allowed them to blend in with their environment thus becoming more difficult to spot and prey upon.

The coat’s shiny, light color would also do a better job at reflecting the sun’s rays. Darker colors absorb more heat than light ones, so palominos would fare better in arid conditions, at least in theory.

Our best guess is that palomino horses originated in the desert. What we know for sure is that they managed to spread all over the world since then. Art depictions and writings confirm their presence in ancient Greece, Rome, Japan, Persia, and China.

Is there such a thing as a chocolate palomino? 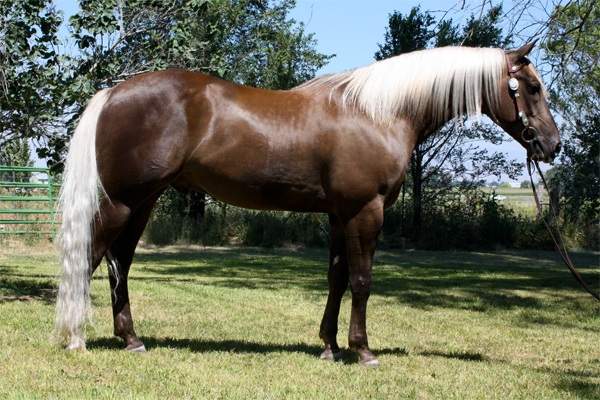 Indeed there is, but a chocolate palomino horse is definitely a rare sight. I never saw one in person, but images of them are truly stunning. In order to breed such a horse, one would have to pair a palomino with a liver chestnut. The resulting foal would not have a shimmering gold coat but a darker one, yet it would still be a palomino because it would carry the creme dilution gene.

These horses still have white manes and tails, but their body coat is darker than you would expect – almost chocolate-like.

How much does a Palomino cost?

I’ve done a little research in order to come up with some up-to-date pricing for palomino horses. It seems that their price is greatly influenced by their breed and not so much by their color. Obviously, a Belgian Draft palomino will cost less than a palomino Quarter Horse.

Going into specifics, I have found a 4-year-old Westphalian mare palomino that had an asking price of up to $30,000, but that was a rather unusual case. Most of the time, these horses are sold between $9,000 and $18,000, but it all depends on their pedigree, age, and breed.

Furthermore, many of these horses are put up for auction, which can end up in some serious bidding wars. If you do decide to buy a palomino horse, make sure to figure out exactly what kind of breed you’re looking for first, and go from there.

Do these horses have any associations in the United States? 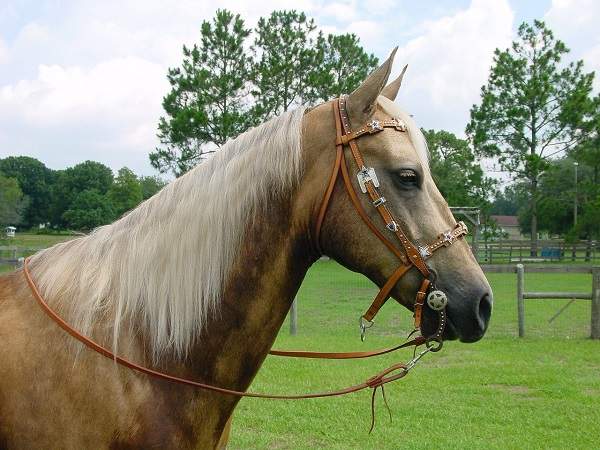 If you’d like to register your own horse with any of these associations, the Palomino Horse Association will accept your horse as long as it has the necessary coloring. This means that the dark color percentage in the mane and tail should not exceed 15%. The coat color should be gold, and eye or skin color are not taken into account for registration.

The first-ever registered palomino was a golden stallion named El Rey de Los Reys (The King of Kings). He was registered in 1935 by Dick Halliday – one of the founders of the Palomino Horse Association.

Some horses may look similar to a Palomino.

These are not the only horses that have a golden or cream coat, but only a horse that actually has the creme gene can be a true palomino. Some horses just look similar, including the Haflinger horse, which also has a very light mane and tail as well as a dark gold coat. If you would like to learn more about the Haflinger horse, feel free to check out this separate article that I wrote specifically for this horse breed.

Another colorway similar to a palomino is buckskin. At a glance, these two horses might look very similar, but they are in fact quite different genetically. A Buckskin has a single creme dilution gene affecting a base bay color. The original buckskin color variation includes a tan coat with black spots on the tail and mane. Moreover, buckskins also have a duller coat than palominos.

I should also mention the Champagne Palomino, which is actually not a true palomino at all. These golden coats are the result of the champagne gene on an ordinary chestnut gene. True palominos will have brown skin underneath their coats, while the champagne version will have pink skin. Last but not least, gold chestnuts (another name for Champagne Palominos) always have bright blue eyes, whereas true palominos have dark navy blue eyes or darker colors.