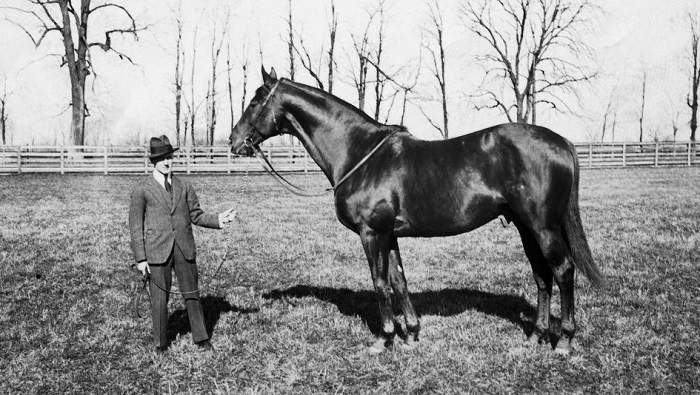 Man o’ War – widely acknowledged as one of the greatest racehorses of all time has led an exciting life filled with fulfillment and appreciation. Some of the world’s most notable sports publications have voted Man o’ War the horse as the most outstanding horse of the 20th century, and I think the title was well deserved.

In this article, I’ll fill you in on some of the most interesting details about Man o’ War’s life, including some facts that you might not have heard of. But first things first: who was Man o’ War the horse?

Man o’ War was an American Thoroughbred that enjoyed one of the most successful and lucrative racing careers to date. This exceptional horse won 20 of 21 races just after World War I, and it brought in a purse of $249,465 for its owner and team. Today, that sum would be the equivalent of $3.1 million. In 1920, Man o’ War was named Horse of the Year, albeit in an unofficial manner.

Everyone knows that this incredibly fast and powerful horse only suffered a single defeat in its entire career, and even then he placed second. His only defeat was to a horse named Upset, on August 13, 1919, in the Sanford Memorial Stakes at Saratoga Racecourse.

People watched the race with bated breath, and while the result was not in Man o’ War’s favor, nobody thought less of the horse after the defeat. Many blame the loss on a false start, and it’s definitely true that modern starting gates were not in use in 1919. While there are different reports and opinions regarding the race, everyone seems to agree that our hero horse left the post near the rear of the field of seven.

It’s fair to say that he had a bad start, and he was also carrying 15 pounds more than its main competitor, a horse named Upset. After the race ended, a reporter for the Times wrote the following:

“On the contrary, the manner in which he ran this race stamped him, in the opinion of horsemen, as the best of his division without question…. There was scarcely a witness of this race who did not believe after it was all over that Man o’ War would have walked home, with anything like a fair chance.”

2. Its first stud manager was a woman.

Back in 1919, women were finally getting their chance to vote, so having a woman stud manager for a successful racehorse wasn’t entirely unheard of. It was kind of unusual, though. Her name was Elizabeth Daingerfield, and she was a highly proficient breeder, especially when it came to Thoroughbred lines.

As you’re probably well-aware already when successful racehorses retire, they begin their breeding careers, and thanks to Samuel Riddle, Elizabeth was chosen to oversee Man o’ War’s breeding habits. The horse was kept at Hinata Farm, but only for a year or so, as he was moved to Faraway Farm in May 1922. Man o’ War shared the same barn with other successful horses, including Major Treat and Golden Broom.

Regarding Daingerfield, quite a number of publications wrote stories about her, and they were all quite flattering. For instance, a New York Herald reporter stated the following:

“Those who have ever seen Miss Daingerfield in the paddocks or pastures with her charges have a picture they recall with pleasure. Mares and foals crowd about her, eager for some token of affection or recognition until her progress is actually impeded. It is the same way with the yearlings which have been reared by her; they are gentle in the extreme. One of her rules is that there shall be no blows or harsh punishment. As a result, few bad-tempered horses have come from her nursery.”

Of course, Elizabeth wasn’t the only one to manage Man o’ War. She eventually moved on to her own projects in 1930.

Below you will find the complete racing record for Man o’ War the horse, including his races from 1919 and 1920. As you can see in the table, this racehorse came in second only a single time in its career, and that was on August 13, 1919. 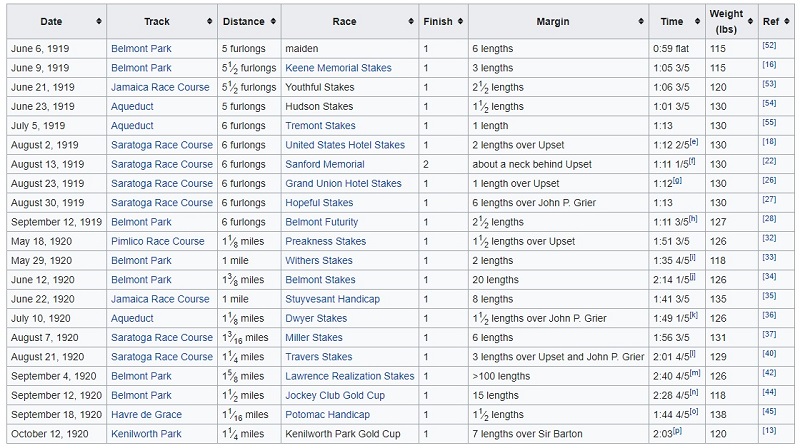 4. He was quite the tourist attraction.

Man o’ War as nearly unbeaten in its prime: a fantastic specimen and a remarkable representation of stamina, speed, and sheer force of will. As such, people from all over the world wanted to see this legendary animal, and so, he became a very popular tourist attraction.

Between 1922 and 1947 about 500,000 people visited Faraway Farm. It is estimated that the horse was visited by around 50,000 people a year. In total, between 1 million and 1.5 million people stopped by the farm and admired this outstanding horse.

Of course, such a popular horse requires exceptional grooming. Some of the most popular groomers for Man o’ War included  John “Buck” Buckner, as well as Will Harbut, who loved the four-legged champion dearly and would often make colorful commentaries as people visited the farm.

Man o’ War lived a long and fulfilled life. Unfortunately, his health began to deteriorate in 1947, and he passed away in his stall on November 1 at 30 years of age. For the funeral, no expense was spared, and immense crowds were present for the event. Moreover, the funeral was broadcasted nationwide by radio.

The stallion was embalmed (quite a rare sight, probably a first in those days), and he was placed in an oak casket lined with the colors black and yellow. There were nine eulogies delivered as part of the service, and dense crowds of men and women were spotted around the concrete moat that surrounded the grave.

Honoring him, racetracks lowered their flags half-mast, and 7,500 people gathered at Churchill Downs in silent tribute while “Taps” was played in the background. Herbert Haseltine created a beautiful bronze statue of Man o’ War, which was placed over the grave in October 1948. The horse’s remains, along with the statue, were later moved to the Kentucky Horse Park in Lexington. They remain there to this day.

Most people are surprised to hear that Man o’ War never actually raced in his original state, Kentucky, even though he has lived there for most of his days. People loved him dearly over there, and they were incredibly proud of his achievements. On his 30th birthday, he was honored with an outstanding editorial:

“May the bluegrass be tender to his taste, the turf springy to his tread, the limestone soil and the wide blue sky of his kingdom welcome to his senses for the rest of his days. He has brought honor and distinction to his native Kentucky.”

As for the reason for his absence at the Kentucky Derby, it looks like, Samuel Riddle, the horse’s owner thought that the horse was too young at 3-years-old to race in a mile-and-a-quarter event. The stallion never even signed up for the race and the grand prize went to a horse named Paul Jones instead.

Samuel Riddle also owned some show horses apart from racehorses. One of these show hunters was Major Treat – a 16.3 hand gelding with an amazing attitude and demeanor. Sadly, a leg injury ended Major Treat’s show career in 1918. He was just 11 years old at the time.

Man o War’s trainer, Louis Feustel, took on Major Treat as his own personal mount. Thus Major Treat ended up living in a stall right next to Man o’ War, and the two formed a bond, maybe even a friendship. They traveled together to the stud’s main racing events, and they spend time together even after War’s career ended.

8. There’s an entire book written about his career.

Originally published on May 2, 2006, Man O’ War: A Legend Like Lightning is an outstanding book by Dorothy Ours that details the life of the great stallion from birth until death. The book is filled with quotes from the horse’s owner, his trainers, and groomers, and it shows how a rebellious horse can be trained to become a legendary racer.

It shows how a horse can be taught to channel its energy into something productive and worthwhile. Everything you ever wanted to know about Man o’ War rests between the pages of this book. You can get it in paperback and as a digital version, and I’m pretty sure there are quite a few audiobooks of it as well.

It’s not at all uncommon for racehorses to have books written about their lives, especially those that were as successful as Man o’ War. Other notable racehorses such as Seabiscuit and Secretariat also have their own biographies, and they’re all just as worthwhile to read.