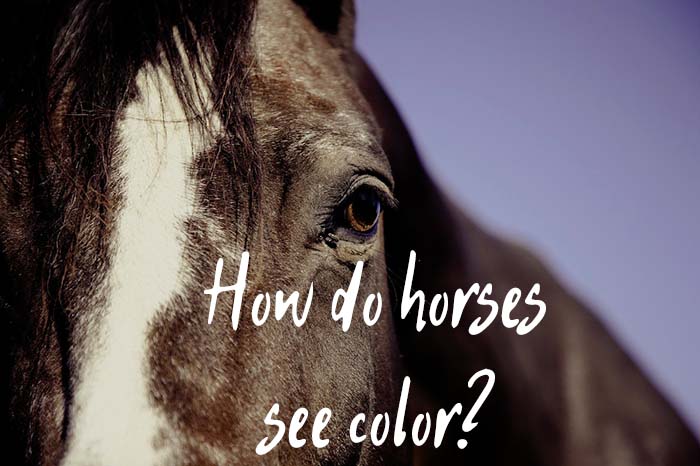 I wanted to touch on the subject of horse vision for a while now, particularly when it comes to the way horses see color but also their capability to see in the dark. Up until recently, people believed that horses are completely colorblind, or even that they see the world in black and white. That’s definitely not the case.

In 2001, a team of researchers from the Medical College of Wisconsin and from the University of Wisconsin-Madison conducted several experiments and scientific studies in order to determine how horses see the world. They found that horses can see some colors but not as many as humans or other mammals. They have something called dichromatic color vision, which means that they can see blues and yellows but not red. Therefore, horses are red-green color blind.

A horse’s color perception vs a human’s.

When compared to a human’s vision, a horse’s color perception is significantly more limited. Humans can perceive four basic color hues, namely red, blue, yellow, and green. Moreover, we can detect a plethora of intermediate hues between these primary ones, which allows us to see the world in incredible detail and color.

Horses are much more limited in this regard, as they probably can’t perceive any intermediary hues apart from blue and yellow. This means that they probably can’t see grass as we do, but we share a similar image of the sky. In order to give you a better idea of what I’m talking about, have a look at the image below. The top A and B sections show off a human’s view while the bottom C and D approximate the way a horse would interpret the image.

Because of their vision limitations, horses don’t react to the same visual stimuli the way we would expect them to in some situations. For instance, in the image above, the two children are wearing colorful clothing that allows them to stand out. This makes them highly visible to a human’s eye. For a horse, however, they blend in with the scenery and nothing about their appearance would signal an emotional response.

The image above also suggests that horses don’t see the world as sharply as we do. Again, the image is purely an interpretation based on scientific results. For now, there’s no actual way to see the world through a horse’s eyes. What we do know is that horses always scan the horizon for predators. This means that they actually see very well in the distance. They can also detect very fine movements, as they have adapted to be wary of predators.

Why do horses only see some colors?

The main difference between a horse’s vision and a human’s vision that we have three types of cone cells in our eyes. This gives us trichromatic color vision, and it allows us to enjoy the rich and vibrant colors of our environment. In non-primates, the most common form of color vision is dichromatic, which is the result of having just two types of cone cells in the eye.

Horses have dichromatic vision, which limits their perception of the world. However, that doesn’t mean that they can’t enjoy life to the fullest. Some animals have an even more limited color vision, including fish and other marine animals who are monochromats (they see in black and white).

They can tell the difference between blue and red.

We’ve established that horses can’t see blue and red, but that doesn’t mean that they can’t distinguish between them. I know it sounds confusing, but they can see red objects or sections of red and distinguish them from other colors.

When it comes to equestrian sports and competitions, many of them are designed with a horse’s limitations in mind. Specifically, some obstacles and sections of a jumping course are painted in colors that are easy to spot by horses. Since we now have a better understanding of how horses see and what colors they can distinguish, we can make it easier and safer for them to compete.

Can horses see well in the dark?

When it comes to night vision, horses have a major advantage when compared to humans. As I’m sure you’re aware, we can’t see very well in the dark, particularly if we go suddenly from a well-lit environment to a very dark one. Our eyes need some time to adjust, and they do, but we’re not very good at performing basic tasks in the dark.

Horses can see very well in the dark, all thanks to a natural light-intensifying device called tapetum lucidum. This special layer inside the eye reflects light onto the retina in order to improve a horse’s vision even in pitch-black darkness. Moreover, a horse has some of the largest eyes in the animal kingdom, even bigger than an elephant or a whale.

Some might argue that the horse’s excellent night vision would make it a nocturnal animal. While this is certainly true for some wild equines such as zebras, the domestic horse can be just as active during the night as it can during the day.

Horses are not color-blind, but their visible color spectrum is much more limited when compared to humans or other animals. Even though they can’t distinguish the color red, they can identify red objects without any issues. Horses have some of the largest eyes in the animal kingdom, which gives them outstanding night vision.

If you would like to have a closer look at the scientific study that I mentioned at the beginning of the article, you can find it right here. If you have any other questions or you would like me to add more information about the way horses see color, don’t hesitate to get in touch.