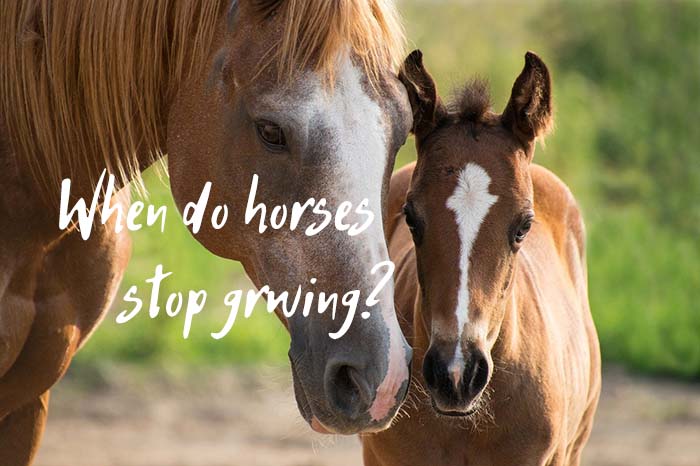 We all know that most horses grow up to respectable heights, most of them reaching between 13 and 15 hands with proper nutrition and a healthy exercise routine. However, for an aspiring horse owner, it’s important to know exactly when will your horse stop growing, so that you’ll be able to make informed decisions when it comes to its tack and stable size.

Horses stop growing when they are around 4 years old. However, this limit is only for the bones that affect a horse’s height. The rest of the horse’s bones will continue to grow until they are around 6 years old. There’s no way to tell for sure if a horse has stopped growing just by looking at it. In order to be completely sure, you’d have to perform a series of X-rays.

Further on, I’d like to discuss the aspects that affect horse growth, and how long it takes for a horse to reach around 70% of its total height.

How does exercise affect a horse’s growth?

As I mentioned before, a proper exercising routine is critical for the development of a young horse. That doesn’t mean that you’ll have to lunge or walk the horse yourself. On the contrary, it’s better to just let the horse roam free in its early years as this will encourage the proper development of its joints, bones, and muscles.

Young horses need to play, run around, and spend as much time as possible on a pasture in order to become strong and healthy. Their physical and mental well-being depends on how much time they spend outdoors without being stressed or put to heavy work.

The key here is to limit your horse’s stable time as much as possible. As a horse owner, it’s your responsibility to provide ample space for playing and grazing. If you confine a horse in a stall at an early age, this will greatly impact its development and growth. It might become weaker than other horses, or it might even begin to crib at an early age.

How fast do horses grow?

Say you have a one-day-old foal that’s already showing signs of being healthy, active, and eager to enjoy life. As a horse owner and handler, you should know that foals grow incredibly fast in their first years. Actually, they’ll reach around 70% of their total height by the time they’re one year old.

As mentioned above, it’s important to let them roam free during this time. They need to play, exercise, eat and sleep properly in order to grow into healthy and dependable horses.

Horses grow steadily after their first birthdays, but they still mature considerably in their second year of life. By the time they’re 2, they will have reached 90% of their total height and weight. Another thing to keep in mind is that you shouldn’t overfeed your horse in its first two years of life. You shouldn’t overfeed it no matter its age, but if you do it when it’s young, this will affect its bone growth and its gastrointestinal system.

At around two years old, a horse’s knees will close up. This affects you because you’re not allowed to ride your horse until the knees have closed up. You should always check the horse’s knees before riding it for the first time.

Do they grow faster than humans?

Horses grow considerably faster than humans. They reach their full height by the time they’re 6, but they’re considered to be mature a bit earlier than that. Their bones develop differently than humans and other animals. They have cartilage on either end of each bone, and their bones fuse as they grow older.

They’re still vulnerable in the first few years of their lives, but compared to humans, horses develop at an astonishingly fast rate.

When is a horse considered mature?

Because they grow up so fast, horses might look mature enough even though they’re just 2 years old. However, their personalities will give them away, as they will probably still have some playful tendencies at that age.

How much weight do foals gain per day? 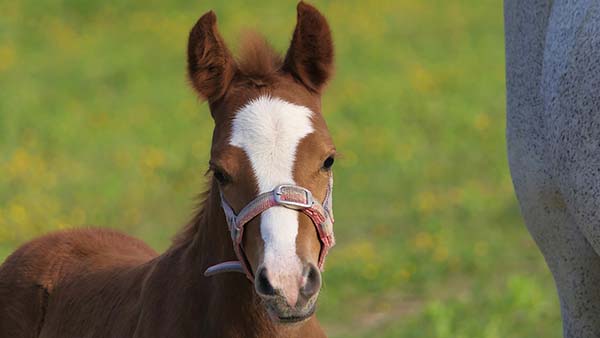 A newborn foal will generally start nursing within a few hours, and it will take on around 25% of its body weight in milk per day. Consequently, it will gain between 1 and 3 pounds per day, so expect your foal to put on weight very quickly.

You can monitor your foal’s weight intake using a scale. This will help you determine if it is growing at a normal rate, too quickly, or too slowly. If you don’t have a scale you can always use a measuring tape, although this method is less precise.

At six-months-old, your foal is now a weanling, and it probably gains around 1.5 pounds per day. When it becomes a yearling at 1-year-old, the horse will normally gain around 1 pound per day. This figure will drop to three-quarters of a pound per day when it reaches 18 months of age.

Can horses grow too fast?

Foals that eat too much can grow up too quickly, and this can cause deformities in their bone structure. These deformities can be corrected if caught on early, but it’s best if they don’t occur at all.

A foal will start to nibble at his mother’s feed when it reaches two weeks of age. It’s generally not a good idea to allow a foal to eat regular feed at this age, as it could easily eat too much of it. Grain is particularly dangerous, as it can cause a horse to grow too fast. You can introduce small amounts of feed to your foal’s diet after around two months since its birth.

I’d recommend skipping grain altogether and going for a mix of grass hay and alfalfa for very young horses. You can also consider supplements if your vet recommends it, and don’t forget to give the foal a full set of vaccinations.

We know by now that horses generally stop growing in height when they’re about 4-years-old. However, the bones in their neck and spine will continue to grow until the horse reaches around 6 years of age.

One could say that a horse is fully developed when it’s six-years-old, but it’s not uncommon for a horse to look completely mature when it’s 4. Let’s do a quick breakdown of the most important things to remember about a horse’s growth cycle: