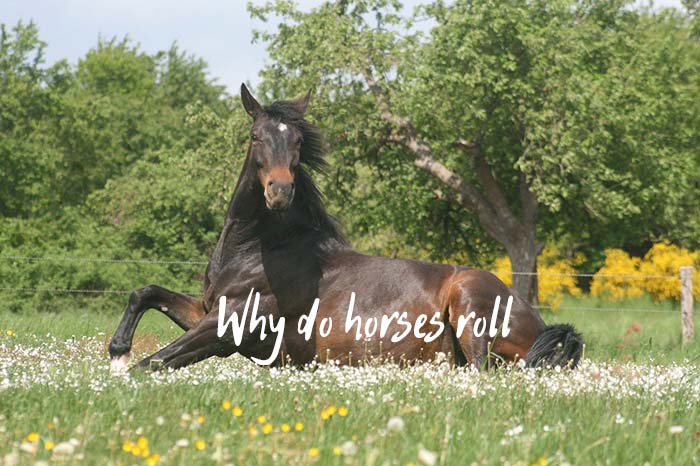 If you owned a horse for a couple of years, you’ve probably seen him rolling around on the ground every now and then. The reasons behind this behavior might not always be obvious, as some horses will roll as a response to a certain stimulus, while others will do it spontaneously just because they feel like it. So, why do horses roll? And is rolling on the ground a reason for concern?

It is completely normal for a horse to roll on the ground. Many of the reasons behind rolling are nothing to be concerned about. These include relieving some stress, assessing dominance, communicating with other horses, or scratching an itch. Some horses will roll just as a way to express their happiness. However, some will do it because they feel discomfort, whether we’re talking about an illness or an injury. The most common reason why horses roll on the ground is that it feels good and they like doing it.

Let’s have a look at each of these reasons individually and figure out why horses feel the need to roll in order to express them.

Horses roll to assert their dominance and social status.

It might sound a bit odd at first: why would a horse need to roll on the ground in order to display dominance? Usually, when other animals do it, it is regarded as a sign of submission (particularly in dogs and wolves). For horses, whenever they find themselves in a new herd, dominant ones will find a specific spot to roll in and they will make sure that they are the last ones to roll there.

Horses roll as a means of communication.

We’ve already established that rolling on the ground can serve to establish social dominance in a herd, but what about other forms of communication? Sometimes, horses will roll in order to get their message across to other horses. Again, by rolling on the ground, the horse will leave its scent on that particular patch of grass or dirt.

Other horses that come into contact with that patch of grass will capture the scent and will be able to learn quite a bit from it. For instance, just by smelling another horse, an equine can determine its age and gender. If you introduce a horse to a new herd, that horse might roll around a bit more than usual in an attempt to spread its scent in many different locations. This way, it makes its introduction to the herd.

A horse might also roll on the ground for more practical, simple reasons. A horse can’t do much to scratch an itch apart from rolling on the ground, which is why this is their go-to method for it. Other animals such as cows will rub their backs against tree trunks or other solid objects in order to scratch an itch. Horses are a bit more nimble, which is why they prefer rolling.

The causes of itching are plenty: insect bites, too much sweat, skin conditions, or unhealthy grooming products. It can be difficult to watch as your horse rolls around in the dirt right after you spent a considerable amount of time grooming and cleaning it. If that happens often, try to figure out what might cause it to roll this much. It might be itchy for some reason, or it might have a serious skin condition.

Sometimes, tack can cause irritation of the horse’s skin. In the warmer months, tack can cause irritations and excess sweat. Horses are more prone to roll around after a workout or after they were ridden for an extensive period of time. It’s always important to make sure that your horse’s tack fits properly. Take the proper measurements and make sure that your horse is comfortable with your choice of tack. 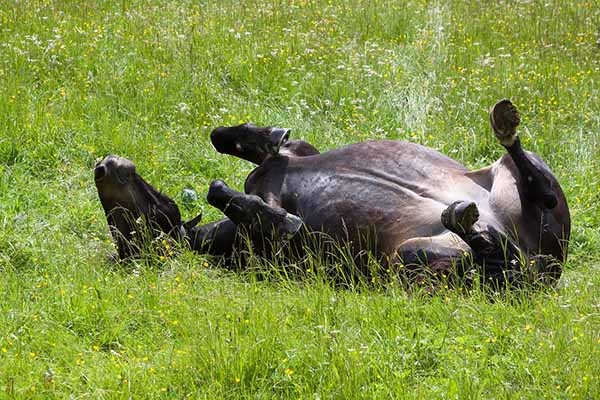 Like most animals, horses get thicker and warmer winter coats to help them cope with the low temperatures of the cold season. However, horses get rid of this excess hair in springtime. The shedding process is not a comfortable one, as it comes with a fair deal of itching and sweating.

In order to accelerate the shedding process, horses will roll around on the ground in an attempt to get rid of that extra hair and sweat. Sometimes it can make all the difference, but in some cases, not so much. If you notice that your horse is struggling to shed its winter coat, you can help it by grooming it regularly or by clipping the coat.

Horses might roll around on the ground just because they see other horses doing it. Like I mentioned above, rolling represents a way to assert dominance and to show off their status in a herd. However, horses might do it just because they’ve found a comfortable spot.

In turn, other horses in the herd might start to roll as well. It’s a bit like yawning in humans, although that “contagious behavior” is often linked to empathy. For horses, it might just be a way to fit in.

Horses roll due to discomfort sometimes.

We’ve seen that horses roll on the ground as a way to show dominance, to scratch an itch, or just because they feel like it. However, they might also do it because they’re in pain. In some cases, a horse might attempt to roll while it has a rider on its back, which is incredibly dangerous for both rider and horse.

If you notice your horse rolling when he clearly shouldn’t, you should first look for any visible signs of discomfort such as wounds, irritation from tack, or soreness. If you can’t find anything with a naked eye, you should definitely consult a veterinarian. Concerning signs of rolling include muscle soreness, injury, or illness.

Colic can cause rolling in horses.

If your horse has colic or any other gastrointestinal issues, it might start rolling in an attempt to alleviate pain. In this case, the horse will drop suddenly and will roll violently. It will look completely different to when it’s rolling for pleasure, so it should be easy enough to spot.

Another thing to watch for is whether the horse shakes off dust after it’s finished rolling. Healthy horses will do this while horses with colic will skip this step. This helps us because a sick horse will often look dirty and covered in shavings or manure. Contact your vet immediately if you notice your horse rolling because of pain!

What about pawing on the ground?

Horses roll on the ground for both good and bad reasons, but more often than not, this behavior is harmless. Here’s a quick breakdown of the main reasons your horse rolls on the ground: