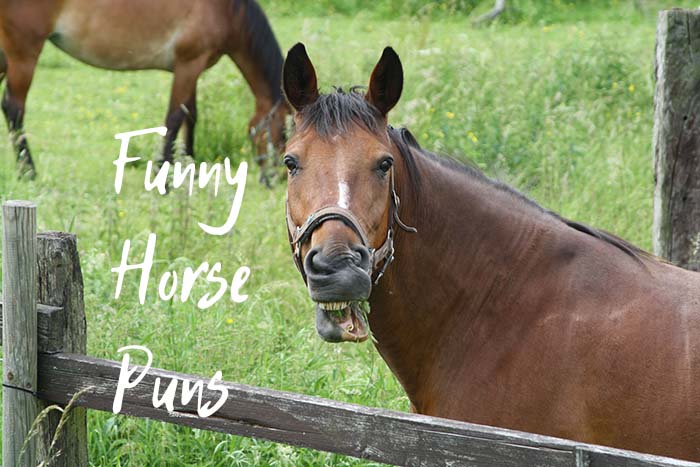 Not everyone likes puns and animal-related puns might be even less popular, but some of them are rather clever and deserve some recognition at least. I personally like puns that put my mind to work, whether we’re talking about horse puns or regular ones.

Horses are so popular and widespread around the globe that they have their own “inner jokes” and puns. Over the years, I’ve probably heard every single horse pun there is, and I wanted to share some of the best ones with you. Maybe you’ll get a laugh out of them, maybe you’ll share them with your other friends. Or maybe you’ll just find some inspiration to create your own.

Horse Puns that Are bound to Stirrup some laughs.

1. A little horse stays up too late at night. His father tells him: Go to bed as it is pasture bedtime.

2. My brother woke up late and was running late for work, so I told him to hoof it!

3. I read a novel that had the story of a runaway horse. It was such a bad tale of ‘whoa’.

4. I once got in a bit of trouble and decided to ask my horse for advice. My friend told me not to because horses are a couple of neigh sayers.

5. My neighbor has a horse who always neighs loudly at night. She’s a night-mare to live with!

6. During winter, my horse developed a sore throat. So, I gave him a cough stirrup!

7. I once saw a horse with its reins painted every color. It was quite a rein-bow.

9. One of the most difficult jobs is to talk with a racehorse. They hardly stand furlong!

10. In the race, I bet my money on a Himalayan horse. I just had this feeling that it was a good horse Tibetan.

11. A horse decided to run away from his own wedding. He probably got colt feet!

13. A horse was arrested by the police but was later released because it de-neigh-ed everything.

14. When the Jedi Knight was to embark on a long adventure, his horse wished him: May the Horse be with you.

15. When horses buy their homes, they pay the mortgage in in-stallion-ments.

16. Horses travel via inter-galloptic space when they go from one galaxy to another!

17. Horses usually drink wine and champagne on a de-canter!

18. My neighbor has a horse with an explosive pace. He decided to name him Neigh-palm!

19. Horses are very bad at boxing as they just keep on hitting the hay!

20. I finally scolded my horse because it ate all of the bedding in its stable. It was the last straw.

21. I recently bought a painting from a farmer who only draws pictures of horses and cows. His name is Oscar Moo-neigh.

23. My horse is a bad dancer because, well, it has two left feet.

24. My horse is extremely spontaneous. He always does things at the very spur of the moment!

25. At a game of poker, the horse kept on losing but won the game in the last round. It was amazing how the stables turned in the end!

26. Who do ponies call when they’re possessed by demons? An ex-horse-ist!

27. When horses vote, they cast their opinion by saying yay or neigh!

28. A horse walks into a bar. The bartender asks him: Why the long face?

29. If a horse becomes lame too early, he was probably out of the gait first.

30. Why did no one like the newest horse on the farm? He kept trying to stirrup trouble.

31. Did you hear about the horse who fired the weather reporter? She kept saying that the weather was stable every day.

32. How do you calm down an impatient jockey? You tell him to hold his horses.

33. What happens when a horse accidentally swallows a dollar bill? It starts to buck.

34. What do you call a horse that has seen the entire world? A true globe trotter.

35. What do you call a racehorse that can never lose a race? A sherbet.

Let’s carry on with some clever horse puns and horse jokes.

36. What do horses use to make their sandwiches? Thorough-bread.

37. Who were the two best horse thieves in the world? Bonnie and Clydesdale!

38. A horse walks into a bar…The bartender says, “Hey!” The horse replies excitedly, “you read my mind!”

39. What do you call a horse who lives next door? A neighbor!

42. My friend is a half horse. He loves being the centaur of attention.

43. My horse is in the hospital. Good news, though, the doctors said that he’s in stable condition.

44. I made a spur-of-the-moment decision and bought a mare. Now I’m saddled with a ton of responsibility and a bucketload of trouble!

45. If she doesn’t rein it in a bit with the gossip, she’s going to stirrup trouble!

46. The farm owner has a couple of horses and a huge sum of money in his bank. He is definitely financially stable!

47. The only disease which most horses are scared of is Hay fever!

48. The little pony didn’t win the singing competition as he was a little hoarse!

49. The man who owned the riding school was in dire straits as his business always kept falling down!

50. My neighbor has a horse who always neighs loudly at night. She’s a night-mare to live with!

51. We had a government-employed doctor in our area who was half horse and half man. He was from the centaur for disease control.

52. I saw my horse watching TV, so I asked him what was his favorite show. He replied, ‘The Neigh-bors’.

53. Horses that participate in races have special diets. They only eat fast food!

55. My friend had a horse who was racing in the coming week. He named it ‘Radish’ and asked us to root for it!

56. Horses are avid readers of books by J.K. Rowling. Their favorite book is Harry Trotter and Hoofblood Prince.

57. Horses only ever go to one place to cut and get their hair done. They all go to Maine.

58. Horses have their own favorite hospital where they go to have babies. It’s in Philly.

59. Ponies are wonderful hosts as they have amazing horse-pitality!

60. After saving up his salary, the horse decided to buy the car of his dreams. It was a Fjord Focus!

70. The horse was getting ready for the gala, so he visited his tail-or to get his suit fixed!

71. The only degree which a horse earns after completing college is a pedigree!

72. While visiting a shopping mall, the horse had to visit the loo, so he went to the bathroom stall-ion.

73. As soon as the horse ate the entire room of hay he had a real baleful look about him.

74. Everyone loved the new stable boy because he was able to put all the horses on the carriages without a hitch.

75. When you hear some gossip from a horse you are basically listening to a neigh-sayer.

76. The horse was kicked off the basketball team because he would foal too much.

77. In order to control a wild teenage horse, you have to know when to rein them in.

78. If you want to buy a thoroughbred horse, you are going to have to pony up a lot of money.

79. When she got the job working in the horse stables, her boss gave her free rein.

Do you like horse racing puns as well? Keep on reading!

80. At the horse reunion, one horse was heard saying that he remembered everyone’s pace but not their manes.

81. Everyone knows that a horse’s favorite sport is stable tennis.

82. The horse was not popular with her friends anymore because she mustang with the wrong crowd.

83. The horse left the farm because he thought that the farmer was trying to harness his creativity.

84. The fastest way to mail a little horse to your friend is by Pony Express.

85. Did you know that if you find a horseshoe it really means some poor pony is walking around in his socks.

86. Vampires like to go to the horse races and see the finish when it is neck and neck.

87. My horse will only watch one movie with me, Fiddler on the Hoof.

88. The only thing as big as a horse but weighs absolutely nothing is his shadow.

89. The hardest thing about learning to ride a horse is the ground.

90. Barge horses make great dancers because they know how to tow the line.

91. The little boy stood behind the horse because he thought he might get a kick out of it.

92. An egg and a young horse have one thing in common, they can’t be used until they are broken.

93.  The reason that Teddy Roosevelt was mean to horses was that he was considered a rough rider.

94. How does a horse from Kentucky greet another horse? With southern horspitality!

95. Why did the farmer ride his horse to town? It was too heavy to carry!

96. A pony went to the doctor and said, “Doc, I think I’m dying. I have this terrible sore throat.” The doctor assured him, “It’s OK — you’re just a little horse.”

97. When does a horse talk? Whinny wants to.

100. Do you know why the horse stalls at a racetrack are labeled A, B, D, E, and F? Because no one would bet on a seahorse.

Did I get all of them? Do you know any other horse puns and horse jokes that you would like to share? Feel free to get in touch and I’ll be more than happy to expand this collection.

Humor is a wonderful thing, and sometimes, it can help us stay focused and positive. Horses are joyful and energetic animals, and I think they would get quite a kick out of knowing we have so many puns and jokes about them.