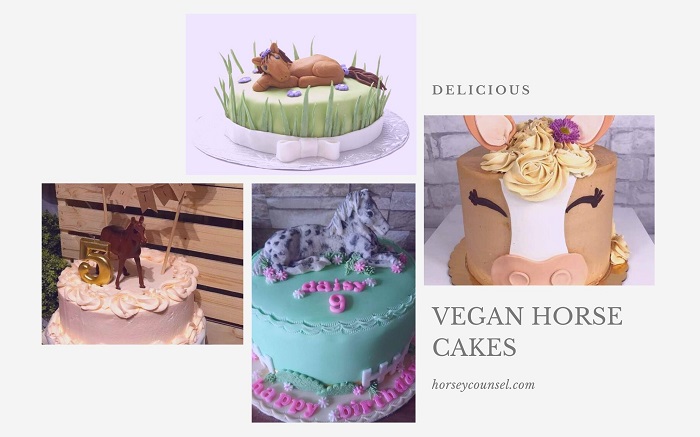 I had a really bad craving for sweets the other day, and I do love a good cake from time to time. But since horses are also such a big part of my life, I figured I’d make a list of some of the most awesome horse cakes I’ve ever come across. However, to make things even more interesting and fun, I’ve decided to only focus on vegan horse cakes for a change. These are horse cakes that are made using 100% cruelty-free ingredients.

This might surprise you, but vegan horse cakes aren’t very easy to find. While some pastry shops do offer certain vegan products, finding one that offers vegan options for their main cake models is a rarity. So I picked 6 of the most beautiful and delicious vegan horse cakes, and I decided to describe them in detail so that you might know what to look for next time you’re aching for a cruelty-free sweet treat.

Even if you’re not vegan and you’re not looking for vegan desserts, the designs of these horse cakes alone should still prove incredibly useful. Let’s get started, shall we? 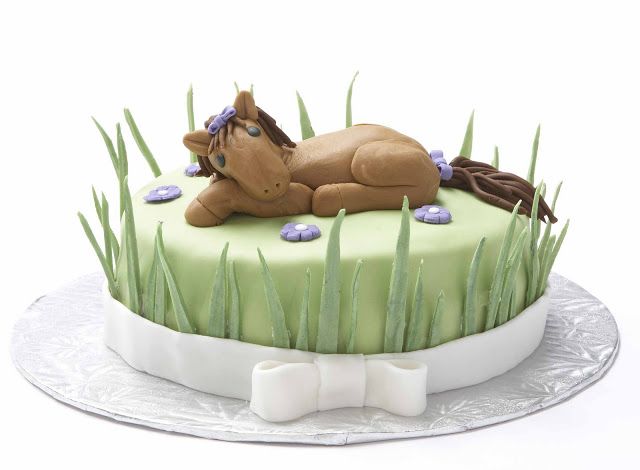 This beautiful vegan horse cake was made specifically for a little girl named Kate. Apparently, Kate really loves horses but she’s also a vegan. This means that no animal products could be used in the creation of this birthday cake. A challenge, sure, but one that was overcome without sacrificing the cake’s taste or appearance.

The good people over at CupOCake who created this cake used animal-free ingredients such as vegan cream cheese, vegan butter, vegan marshmallows, white vinegar, almond milk, and apple sauce. Apparently, they had to create the cake multiple times in order to get the recipe just right. The result is a completely vegan horse-themed cake that tastes just as good as non-vegan products.

As for appearance, the main body of the cake is covered in green frosting, and it acts as a resting bed for a beautiful brown horse. The horse is surrounded by a series of purple flowers, which go perfectly with its purple ribbon. Other noteworthy elements include various blades of green grass, as well as a white ribbon that ties everything together. 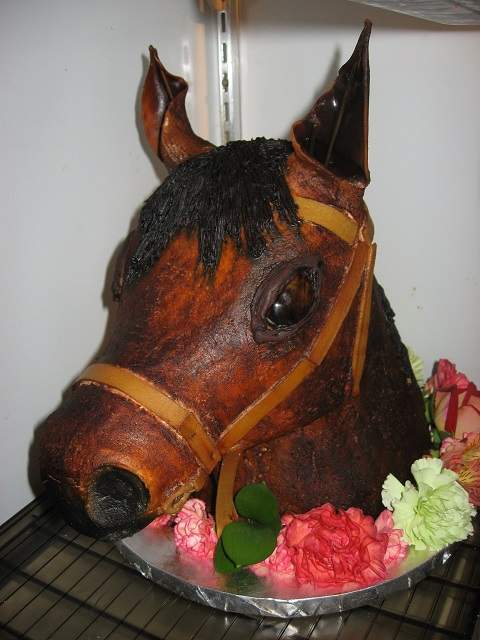 Now this vegan horse cake looks a bit too realistic for my taste, but it could definitely work very well for a Godfather-themed party. Remember the horse head scene? Yeah, not very pretty. However, the cake itself looks delicious and is actually quite proportionate if we’re thinking about a pony or a miniature horse.

The horse has large brown eyes, as well as black hair. It’s wearing a light brown bridle, and it has a short nose. The bottom part of the cake is decorated with beautiful carnations. I can’t tell exactly if those are edible or real flowers, but my guess is that they’re real. Sadly, I don’t have any other information to give you about this cake such as its ingredients or flavoring.

I can tell you that it was made by Jerri’s Cakery & Confections, so make sure to pay them a visit if you’re looking for a similar vegan-themed cake for your own party. 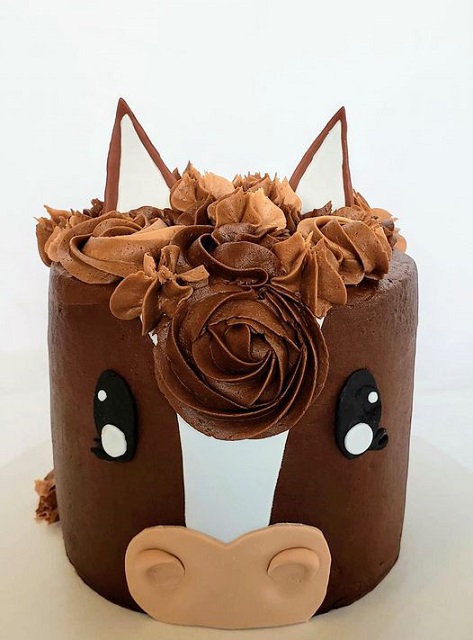 This quirky and fun-looking birthday cake was made by Tera’s Vegan Cakes over in Kansas City, Missouri. It’s a cylindrical-shaped vegan cake, which means that it’s taller than it is wider. Choosing this shape meant that Tera was able to create a more detailed representation of a horse’s head, albeit in a relatively simplistic manner.

The decorations are spot-on, including the ears, the creamy deliciousness that represents the hair, as well as the eyes and nose. Even though this cake is completely vegan, it looks just like your everyday chocolate cake. While I can’t tell you what it tastes like, I do know that Tera decorates all of her products with vegan buttercream, which does taste amazing. 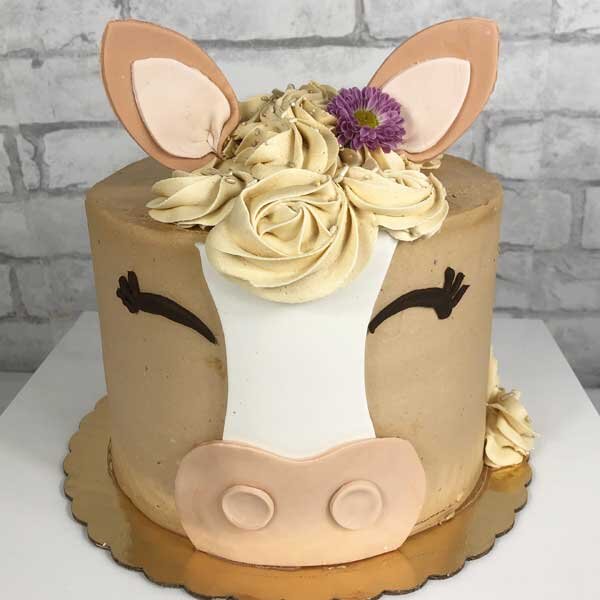 As an alternative to the cake above, this similarly-shaped horse cake puts on a happy face and dons a slightly lighter coat color. This horse cake is currently available at Posh Cakes, and while it’s not conventionally offered as a vegan product, you can select between three different allergen options upon placing your order. You can get this cake as a regular, vegan, or gluten-free option.

As for the design, it looks very similar to Tera’s offering. However, the eyes are now closed and the overall height of the cake seems a bit smaller. There’s also a flower in the horse’s “hair”, right between the ears. This vegan dessert looks so cute that it’s almost difficult to carve and eat. 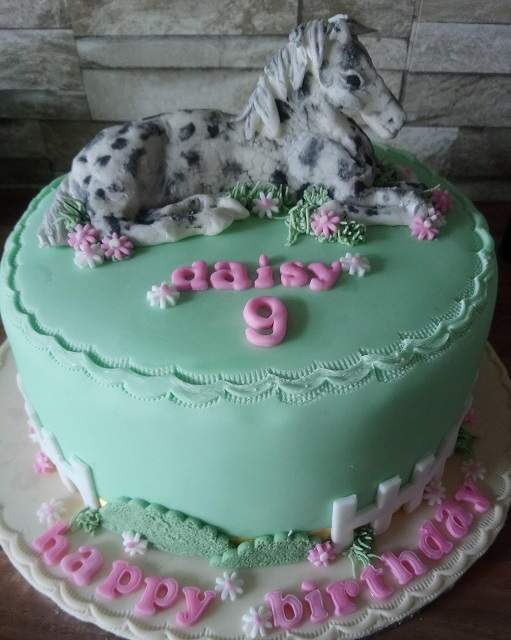 Daisy was definitely fortunate to have such a beautiful vegan horse cake for her 9th birthday party. According to the cake’s makers, they used no eggs, cow milk, or butter, which is definitely impressive considering how good it looks. The horse itself sits on the main cake body, and it is surrounded by beautiful pink flowers.

The birthday girl’s name is written in pink next to the horse, as well as the number 9 that signifies her new age. There’s also Happy Birthday written in the same pink frosting on the very bottom of the cake. The horse is predominantly white but has a series of black spots across its body. It’s laying down, resting in the grass. 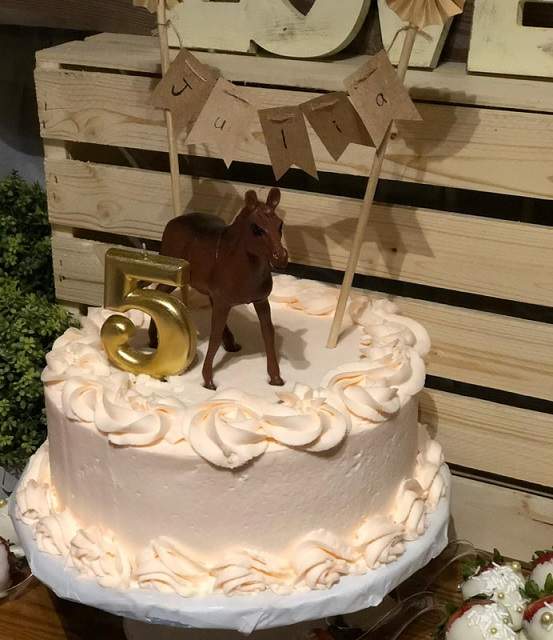 Last but not least, I wanted to show you this wonderful plant-based birthday cake from FgfVegan. It’s a custom-made cruelty-free product that doesn’t include dairy products, eggs, cochineal, or gelatin. This one was obviously made for a 5-year old named Julia. The horse sits directly on top of the cake, right next to the 5-shaped birthday candle.

It’s a brown chocolate-colored horse that contrasts beautifully with the lighter tone of the main cake. I couldn’t begin to tell you what this cake tastes like, but it’s definitely one of the best-looking ones on this list.

It’s not easy to find a good plant-based or cruelty-free birthday cake, especially if you want it to be horse-themed. However, as you can see in the examples above, there are several pastry shops that offer these kinds of services. You just need to know where to look. I hope that this small list has helped you out in some shape or form and that you now have a better idea of where to look for a vegan horse cake.

Of course, if you have one that you’d like to share, or if you offer similar services, don’t hesitate to get in touch and I’ll update this list accordingly.