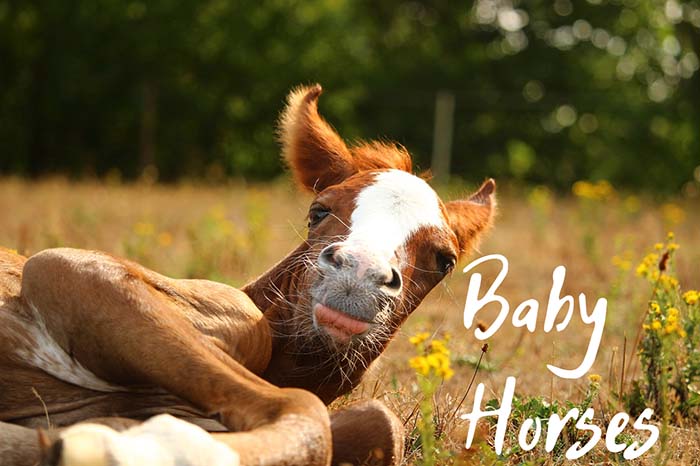 Today I wanted to touch on the subject of baby horses, more specifically what are they called. However, since I have plenty of time and space to develop this subject further, I also wanted to share some very interesting facts about baby horses, some of which you might not have heard about.

A baby horse is a unique and beautiful thing. Compared to humans, baby horses are ready to take on the world just a few hours after they were born. They’re eager to develop, to learn, to experience all that life has to offer. Considering the lifespan of a horse, baby horses go through childhood very quickly and mature in the blink of an eye.

What is a baby horse called? The proper term is a foal, as long as the equine in question is up to one year old (regardless of gender). Once the horse turns one year old, it becomes a yearling. If you want to get gender-specific, a male foal is called a colt, while a female is a filly. These terms are used until the horses reach 3 to 4 years of age. As long as the foal is still nursing, it’s going to be called a suckling. After it separates from its mother, the young horse is referred to as a weanling.

Up next, I invite you to enjoy a generous selection of interesting facts about baby horses and young horses in general.

What’s the difference between a pony and a foal?

At a glance, and for an inexperienced equestrian, a pony and a foal might look incredibly similar. Assuming that they both have the same height, it could be challenging to distinguish between the two without some careful examination. However, the main difference between a pony and a foal is that a foal will grow beyond 14.2 hands and will become a full-fledged horse, whereas a pony will never exceed that height.

Officially, any horse that’s shorter than 14.2 hands is considered a pony. Apart from height, there are other characteristics that differentiate a pony from a foal. For instance, ponies have thicker coats, tails, and manes, and they’re able to handle cold weather easier. Ponies are also smarter than horses, they’re more resilient, and they live longer. Last but not least, horses have short legs, dense bones, broad chests, and thick necks. They also have smaller heads than most horses.

How long is a mare’s gestation period?

Unlike humans, dams need 11 months before they’re usually ready to give birth. That’s not to say that there aren’t delays or early arrivals. Foals are known to come into the world a few weeks earlier than expected and a few weeks late. It’s usually not a problem.

As for the best time to come into the world, that would be during springtime. Obviously, the weather is more forgiving during the spring season, which gives the foal a better opportunity to adapt and grow properly.

Foals need specific care in the first 24h of life.

Right after a foal is born, its body goes through an enormous number of changes. Most of the time, you won’t have to do much and the baby horse will develop normally, as nature intends. However, it’s important to know that a foal’s condition can deteriorate quickly if something does go wrong within its first day of life.

As the mare gives birth, all you have to do is observe and make sure that everything goes smoothly. Don’t interfere and don’t disturb the mare unless something is seriously wrong and requires your intervention. You can call your vet as soon as the mare’s water breaks. Having an expert on-site will definitely ease your nerves, but it’s definitely not a necessity most of the time.

Don’t attempt to clean the foal – that’s the mare’s job. Doing so will only disturb the bonding between mare and foal. The foal’s breathing, circulatory, and nervous systems will continue to develop in the first 24h of life. After around 12 hours, it will likely get up several times per hour to nurse, and it will become playful. After 24 hours have passed you can safely turn out the foal alongside the mare, assuming that they have bonded.

What is a foal’s mother called?

A foal’s mother is called a dam or a broodmare. These terms are not to be confused with “mare,” which refers to any female horse that’s over two years old. Mare is a more general term than a dam. A dam has given birth to at least one foal throughout its lifetime, while a broodmare is a dam that has produced multiple stakes-winning horses.

Broodmares are female horses that are used specifically for reproduction purposes. After their racing careers are over, many stakes-winning mares become broodmares, just as stallions are brought out to stud.

Throughout its lifetime, a broodmare can produce a generous number of foals. There’s no exact number, but it’s not uncommon for a healthy broodmare to have as many as 16 baby horses. They give birth to a single foal each year provided they remain fertile.

How quickly can baby horses wean?

Not all equestrians agree on a specific timeframe to wean a foal. However, medical studies have shown that a baby horse can feed itself by grazing grass as early as three months of age. Is that the best time to wean a foal, though? That topic is up for debate, as some believe that foals weaned off this early are more likely to develop behavioral problems and are prone to bone density issues.

A better time to wean a foal would be at four months of age. However, there’s also the issue of overworking the dam. Providing milk for a young horse for four months at a time can potentially drain the dam’s strength. As long as she’s up for it and is in good health, I’d generally recommend weaning right after the horse has turned four months old.

How soon can baby horses stand?

It’s important to keep a close watch on the baby horse in the first few hours after birth. Usually, they’ll begin to stand after just one hour, which is a good indicator of strength and good health. The foal should also begin to nurse within two hours and pass his first stool within three hours. If he doesn’t perform these tasks on time, you might need to call in a vet for an examination.

You should also take note of how often is the foal nursing, and check the dam’s udders to see if they reduce in size after the foal has fed. Baby horses are not particularly agile right after birth. That’s understandable. But the fact that they can stand after just one hour of being brought into this world is nothing short of amazing.

Most foals are born at night.

When I first heard that most foals are born during the night time I was a bit puzzled. Surely, there must be a logical explanation for this, right? As it turns out, most foals are indeed born in the middle of the night, and that’s because the mother instinctively tries to protect her newborn from predators.

At nighttime, some predators will have a more difficult time finding the dam and foal. The dam can also blend more easily with her surroundings. Giving birth at night is basically an attempt to hide off for labor. A maiden mare that gives birth for the first time will generally need up to an hour of heavy labor in order to expel the fetus. As a general rule though, most foals come into this world after 12 to 18 minutes of heavy labor.

During labor, both the dam and the foal are incredibly vulnerable. Finding a dark and quiet spot to give birth is very important for dams in the wild. It’s not necessary for domestic horses that are being kept safe by their handlers, though.

Most horses have the same birthday.

Ok, I’ll admit that this fact might be a bit confusing. Foals are obviously not all born on the same day, but their official birthdays are kept the same for showing and racing purposes. There are two major differences, however. In the Northern Hemisphere, all horses have a universal birthdate of January 1, while horses in the Southern Hemisphere are marked with birthdays on August 1.

In order to avoid an age disadvantage, professional horse breeders do their best to plan their foals’ births as early in the year as possible. If a foal is both later in the year, it will still be marked with a universal birthday but it might compete against horses that are much older.

How long does it take for a baby horse to get its first teeth?

By the time they become one year old, foals generally have 24 teeth. It’s worth noting that these are temporary teeth, also known as milk teeth. They’ll soon be replaced by the foal’s permanent teeth. These permanent teeth come in a bit later in life, but they’ll replace the foal’s baby teeth by the time it becomes 5 years old.

You shouldn’t attempt to ride a foal.

Foals are more fragile than fully-grown horses, and they need a couple of years to develop their muscles and bones. It’s of utmost importance to not attempt to ride a foal, as this could severely impact its health and growth cycle. You can start off with light groundwork exercises when the horse is two years old, but I’d definitely abstain from riding it until it turns four.

At four years of age, most horses will have a fully developed skeleton and muscular system. If you’re in doubt, please consult your vet and ask him or her to perform a complete physical exam before you attempt to ride your horse for the first time. It might seem effortless, but bearing a fully grown person’s weight for the first time can be incredibly challenging for horses.

Here are the main takeaways from this article about baby horses: